For this week's blog I have left the Highlands of Scotland, figuratively speaking, and have travelled across the 'pond' to the east coast of North America, to review Burial and Death in Colonial North America - Exploring Interment Practices and Landscapes in 17th Century British Settlements, by Historical Archaeologist Robyn S Lacy. Said tome is the product of Lacy's Masters dissertation and I was extremely privileged to have been offered a sneak view of the manuscript before it reached the publication stage. So, without further ado...... 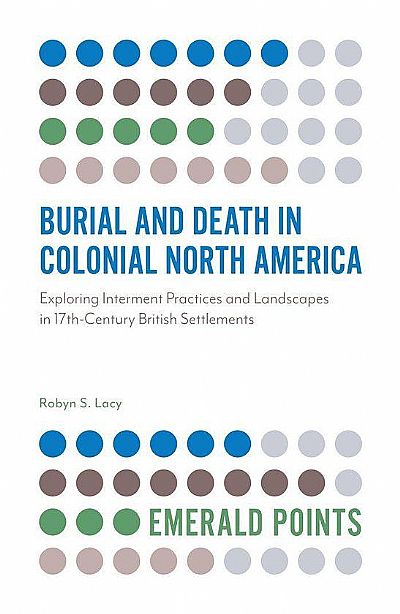 Comprising of six compact chapters Lacy successfully blends archival source material with original archaeological research in her efforts to examine seventeenth century burial landscapes within North American settlements, together with an analytical study of the community's relationship with the dead. The book commences with a concise introductory chapter, providing the reader with a brief theoretical background to the subject matter, together with a summary of some of the important research topics to be explored. This is followed by a helpful literary review, offering those who may be unfamiliar with the topic a relevant grounding in what is to follow. The early chapters (2-3) historicise the political and cultural climate of the time. Chapter Two begins by exploring British burial traditions before the Protestant Reformation and covers a myriad of subjects, from the belief system of Purgatory to grave monuments and the role of the Church. This is followed by examining the effects of the Reformation, and its aftermath, on British colonial settlements in North America, in particular the burial landscape. The enormity of the topic has necessarily obliged Lacy to choose a path of generality. This is not meant as a criticism per se, as it is nigh on impossible to condense over 1,500 years of historical burial practice and identity into only a few short paragraphs. Lacy overcomes said issue admirably.

The next chapter focuses on the more fundamental aspects of seventeenth century burial to be found on the East Coast of North America, such as burial accoutrements, in the guise of coffins, coffin nails, shrouds etc, as well as various types of grave monuments and their associated iconography. An interesting addition to the chapter is an investigation into protective marks, also known as apotropaic marks, which act as a form of protection to ward off evil spirits or bad luck. The most common example, the hexafoil, also known as the daisy wheel or witch hex, is studied succinctly in relation to the mortuary landscape together with domestic folk magic. 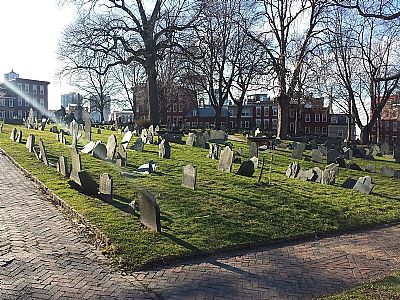 Chapters Four and Five gradually move the discussion from discourse to practice and they engage most directly and productively with the subject at hand. Chapter Four provides the reader with an analytical case study into the organisation of burial grounds in relation to the settlement landscape. Using a combination of visual spatial data, together with the wonders of Google Earth, Lacy undertakes to trace the origins of each chosen survey site within a quantifiable framework. In total forty-three burial grounds were surveyed on the mainland of North America, with a further twenty sites on the island of Newfoundland. All sites were originally founded by British settlers. By utilising such targeted research Lucy successfully delivers an illuminating insight into seventeenth century burial practices, raising several pertinent queries along the way, such as the frequency of burial grounds located within fortified sites to the influence of the Church in burial ground placement. The resulting data is then added to what is described as a ‘statistical frequency model,’ displayed in a tabular format, allowing the reader to easily access and cross-check the information. What follows in Chapter Five is a case study of archaeological exploration, not only to test the viability of the statistical frequency model in the field, but also to unearth the lost burial ground of Avalon in Ferryland, Newfoundland. The only archaeological evidence of its existence, until then, had been three simple gravestones fragments. Having first provided a detailed historical background, the results of successive years of fieldwork are described, from initial Ground Penetrating Radar (GPR) work and test-pitting in 2016, to full scale excavation in 2017. To close, an additional comparable case study in Guilford, Connecticut is debated. 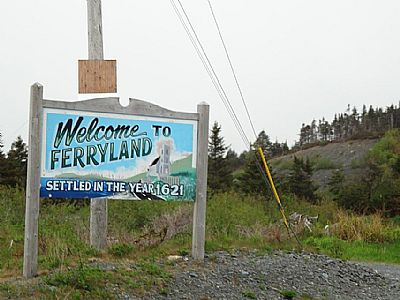 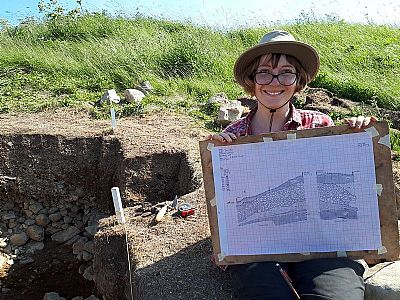 Robyn Lacy in the trenches at Ferryland

The final chapter is a useful summary of what has been presented. Beyond this synopsis Lacy goes on to point out areas where more study is needed and suggests topics for further investigation.

In summary I read this book with great interest. Drawing on an impressive array of sources, including fieldwork, Burial and Death in Colonial North America - Exploring Interment Practices and Landscapes in 17th Century British Settlements presents a useful insight into the subject matter. I found the statistical frequency model template extremely appealing and came away contemplating its potential application in other related areas. Moreover, the book unquestionably passes my twofold 'thumbs up' test, namely did I come away from it learning something new and did I scour the notes and references section at the end looking for further material to add to my burgeoning library? An emphatic yes to both. To sum-up, very well-researched, incredibly informative and a noteworthy addition to any reference bookshelf.