War memorials can take on many forms, from a simple plaque on a wall to a large, monumental edifice. These shrines of remembrance are important markers of time, they not only link the past to the present but also permit people to respect the sacrifice of those who died and/or fought in various conflicts. Moreover, it may be the only monument whereby the names of specific fallen are noted. Very often such monuments contain the names of those families that still reside with the community or provide a historical record of those who once did. In essence they are an important feature of any country’s historical and architectural heritage. One such memorial that fits all of the above is the striking Inverness War Memorial, in the Highlands of Scotland. 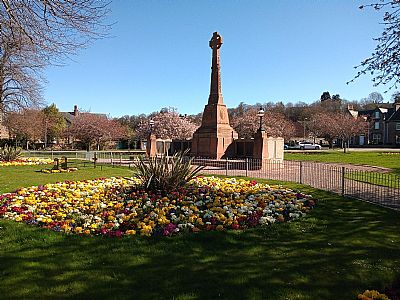 Designed by architect J. Hinton Gall, and carved by D & A Davidson of Academy Street, Inverness War Memorial is located on the east bank of the River Ness, a short walk from the city centre, and consists of a red sandstone Celtic cross sat upon a stepped plinth. Extending from either side of the base are commemorative sandstone walls, each adorned with panels detailing the names of the fallen, which date from the First World War One up to the present day. Directly opposite the memorial is a well-manicured lawn, Cavell Gardens, so named in respect of British nurse Edith Cavell, regarded by many as the most renowned female casualty of the First World War (see below), in addition to a ‘Garden of Remembrance,’ honouring those who fell at Passchendaele during the First World War. 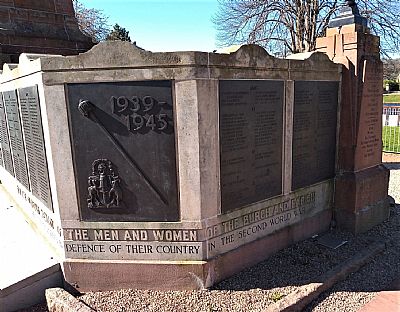 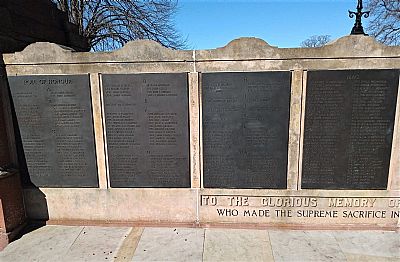 Roll of honour in alphabetical order 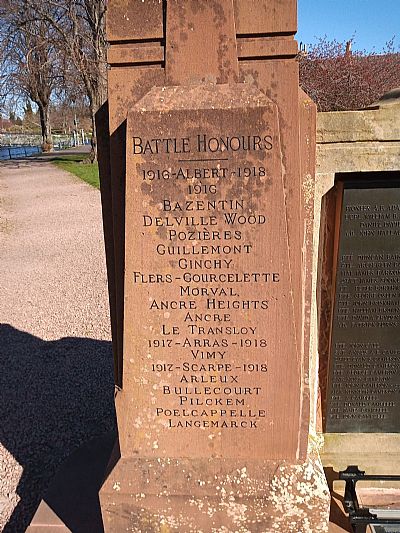 Inscription of battle honours during the First World War 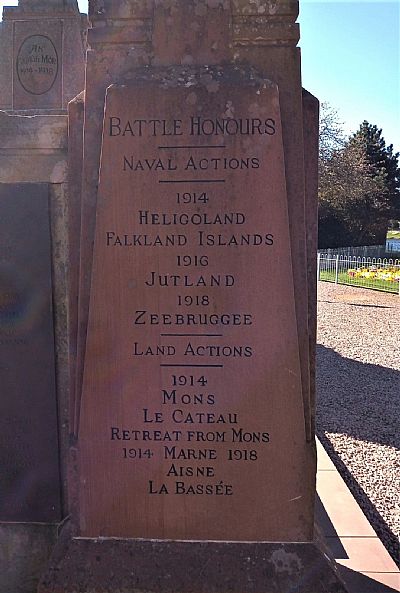 Although the idea of a war memorial had been discussed in distinguished circles from as early as February 1919, it was not until January 1920 that an official War Memorial Committee was formally set up to handle the task, an editorial in the Inverness Courier at the time commented on the fact that the Council had at last come to ‘some realisation of the duty which it owes to those of its citizens who fought in the late war.’ Countless suggestions poured forth as to what form the memorial should convey, from a ‘Public Baths and Gymnasium’ to an institute for young men and boys. In due course the Royal Scottish Academy advised that said memorial should be monumental rather than utilitarian with Ludovic MacLennan Mann, the Academy’s Actuary and Prehistorian, stating in a pamphlet entitled ‘War Memorials and the Barochan Cross,’ that it would be fitting to use Celtic designs: ‘in the case of heroes of Celtic descent it would be appropriate to draw on Celtic art for the embellishment of the memorials.’ 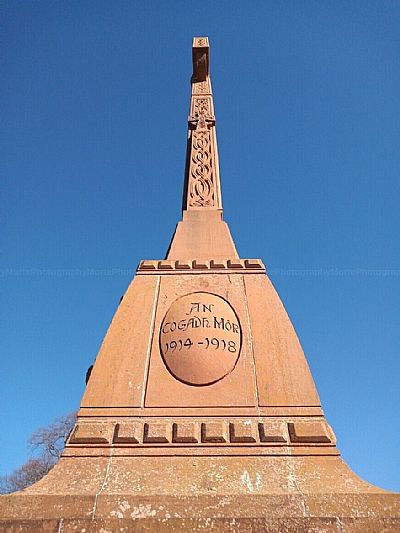 By the 10th of June 1921 over £2206.6s had been raised by generous benefactors, although the Provost of Inverness noted that ‘thousands in the town had not given a single shilling’ despite the sacrifices made on their behalf. In the beginning an alternative site was suggested, at the east end of Ardross Street, but in September 1921 the Committee finally agreed on the recently named Cavell Gardens location (see below.) The Inverness Courier described this as an open picturesque site ‘where it is likely to be seen in future by all visitors to Inverness.' Inverness War Memorial was finally unveiled in December 1922, in front of a crowd of over 5000 people. 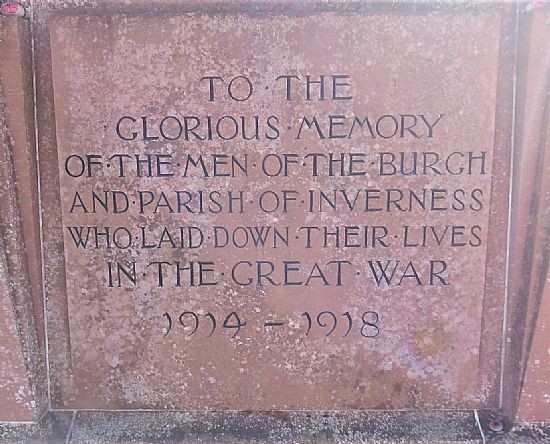 As previously remarked upon, Cavell Gardens is named in honour of British nurse Edith Cavell, who assisted hundreds of British and Allied soldiers escape the unwanted attention of the Germans during the First World War. Born on the 4th of December 1865 in Swardeston, Norfolk, Cavell first trained as a nurse in London, working in hospitals in Shoreditch and King’s Cross, as well as in Manchester, before accepting the post of ‘First Matron’ at a newly founded training school for nurses in Belgium in 1907. With the outbreak of war and the German invasion of Belgium in 1914, the training facility quickly transformed into a designated Red Cross hospital, treating the wounded from both sides of the conflict as well as regular civilians. It was here, in September 2014, that Cavell first encountered local resistance fighters when she was invited to help two wounded British soldiers trapped behind enemy lines. Having treated them within the hospital confines, she then arranged to have them smuggled out of Belgium and into Holland, who was neutral at this time. Over the next eleven months she assisted the getaway of over 200 British, Belgium and French soldiers from German occupied Belgium, first sheltering them inside the hospital before arranging suitable guides to take them to the border. 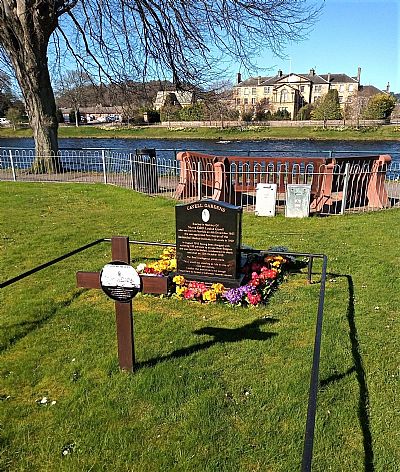 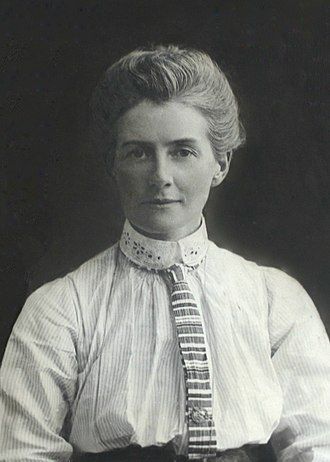 In August 1915 Cavell was arrested by the Germans, together with 34 other members of the resistance network. She was tried and subsequently found guilty at a court martial on the 7th of October 1915. The sentence was execution by firing squad. The British Government could do little to help with Sir Horace Rowland of the Foreign Office proclaiming, “I am afraid it is likely to go hard with Miss Cavell; I am afraid we are powerless.” Thus, in clear contravention of the Germany military code of occupation, in addition to the First Geneva Convention, on the 12th of October Edith Cavell was shot to death. After the Armistice, her body was exhumed from its original burial place in Brussels and returned to England where, after a memorial service in Westminster Abbey, she was re-buried in Norwich Cathedral Close.